Includes: UWA (Uganda Wildlife Authority) park entrance fees of USD35 per person per day, Guides, porters, meals and accommodation while in the mountains

Climbing equipment can be hired at our head office separately

The central circuit starts at the Rwenzori Mountaineering Services offices at Nyakalengija. You need to arrive in the morning to allow ample time to rent equipment and meet your guides and porters. The trail begins by passing through farmland to the park boundary beyond which it follows a thick forest along the Mubuku River, crossing its Mahoma River tributary before starting a long, steep climb up onto a massive ridge to reach Nyabitaba hut. During this part of the trip you may hear chimpanzee and see black and white colobus, blue monkey and the brilliantly coloured Rwenzori turraco.

The hike takes an average of 6 -7 hours.

From Nyabitaba follow the trail that drops down through the forest to the Kurt Shafer Bridge, just below the confluence of the Mubuku and Bujuku rivers. Passing through the bamboo forest, traverse through a long and exhausting stretch of slippery moss-covered rock. From the Nyamuleju rock shelter, Mount Stanley and Mount Speke can be seen before passing into the zone of the giant heather, lobelia and groundsel. Finally reach John Matte Hut after passing through the tiring bog, for dinner and overnight at the hut.

From John Matte Hut the trail drops down to cross the Bujuku River and enters Lower Bigo Bog, the home of giant lobelias. Jumping from tussock to tussock, the bog is finally crossed but rarely without the feet sampling some of the freezing ooze below. The upper Bigo bog gives way to Bujuku Lake, with views of Mt Baker to the South and Mt Stanley to the West. Bujuku Hut, well located in the shadow of Mount Baker and Mount Speke, is set in a narrow valley below Stuhlmann Pass. This camp is good for acclimatization for clients attempting the summits of peaks Mount Stanley and Mount Speke. Dinner and overnight at Bujuku hut.

Early in the morning start the hike through stullmans pass (4192m asl.) and spectacular views of Virunga National park of DR Congo to Victorio Emanuele peak.

Prepare to descend back to Bujuku camp from Victorio Emanuele with views of Bujuku valley and Bujuku lake, Margherita and Albert peaks on Mount Stanley, and Mount Baker for an overnight at Bujuku Camp.

The descend takes an average of 3 – 4hours.

Leaving Bujuku, the trail takes you through more bog, while climbing the steep slopes west of the lake and through the magical and forest of Groundsel Gully. Turn to  your right up to Elena Hut and Mount Stanley on a steep trail over large boulders, while the trail on your left leads to Scott-Elliot Pass and down to Kitandara Lakes the trail on he left leads those who are not climbing Margherita Peak to Kitandara Hut. Those climbing the peak will have their Dinner and overnight at the coolly and Icy Elena Hut.

Very early in the morning, you attempt climbing the highest peak, Margherita of Mount Stanley. To reach the summit of Margherita, the climb takes about 4 -5 hours depending on the weather conditions and the pace of climbing this mountain. This tough walk takes you over three glaciers, slippery rock, ice and very exposed areas which are open on many sides. Climbing on to the glaciers, cross the Stanley Plateau and proceed with the ascent. Acclimatized to fog, altitude sickness and coolly weather, scramble up to the summit of Margherita the highest peak of the Rwenzori. The descend from Margherita peak back to Elena Hut will take you about 2 – 3hours.

After your lunch at Elena hut, descend to the Scott-Elliot pass (4372m asl.), where there are spectacular views of Bujuku Lake and Mount Speke. After,  the trail passes you through an alpine zone of sparse vegetation and rough boulders, descend past the Kitandara Lakes for dinner and overnight at the Kitandara camp.

The climb starts early morning from Kitandara Camp through Fresh Field pass (4215m asl.) with views of DR Congo up to Edward peak.

The ascend to the peak takes about 5 – 6 hours.

From Edward peak descend back to Fresh Field pass and then back Kitandara camp for an Overnight.

From Kitandara, take on the trail that ascends steeply up the headwall, spreading out from the base of Mount Baker and continuing along the south side of the mountain to Fresh field Pass 4282m asl. At this point you can view into the Congo to the west and Mount Stanley to the north.

From the pass, take on the long high alpine mossy. Thereafter start the descend through steep rocky trails and the rock shelter at Bujongolo, the base camp for the historic expedition by the Duke of Abruzzi in 1906 and then an overnight at Guy yeoman camp.

Below Guy Yeoman, the route descends the cliffs of Kichuchu. Beyond Kichuchu the muddy path crosses the Mubuku River twice through a bamboo forest before climbing downwards to Nyabitaba to complete the circuit.

Continue descending Nyabitaba Camp and complete your trek by the evening at Nyakalengija, the base camp. 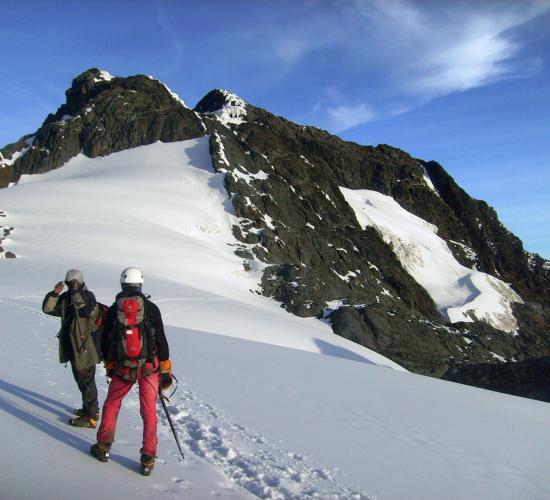